Ringworm of the scalp: tinea capitis

Despite its name, ringworm is not caused by worms, it’s caused by fungi called dermatophytes that can infect the skin and cause a ring-shaped rash. This rash can occur anywhere on the body but when it occurs on the scalp it’s called scalp ringworm, or tinea capitis.

Tinea capitis is a highly contagious fungal infection of the scalp hair and skin. It is more common in children than adults and if fact it is so prevalent among children that it is the most common paediatric dermatophyte infection worldwide.1 Exact numbers are likely underestimated,2 however, globally there are thought to be over 200 million cases3 with the annual market for the treatment of tinea capitis estimated at $0.2-0.5 bn.

Tinea capitis is a frequent problem in most countries, but there is also geographic variation and a high proportion of cases are found in resource-poor areas. For instance, there are estimated to be 78 million cases in Sub-Saharan Africa alone.4 In addition to age-related and geographical differences, different ethnic communities also show variations in tinea capitis incidence. This has been demonstrated by a US study of school children in which infection rates were highest in African-American children (12.9%) and lower in Hispanic (1.6%) Caucasian children (1.1 %).5 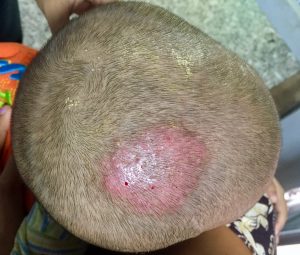 The key characteristic of tinea capitis is a red, itchy rash and patchy hair loss. This occurs when dermatophyte fungi that normally live in dead layers of the skin invade the living outermost layer of the skin – the stratum corneum.1 The fungus continues to grow downwards and into the hairs, which weaken and start to break, causing hair loss.1 Levels of severity can range from a mild rash with little hair loss to large inflammatory plaques with severe alopecia and permanent scarring and hair loss.6

These symptoms can not only be very physically painful but can also have a huge social impact. The change in appearance of the patient can negatively affect feelings of self-worth and mental well-being.2 In some cases, particularly in developing countries, skin diseases can also lead to social isolation and marginalisation of those infected from the local community. 4

Such measures may seem severe, but they can be vital to prevent the further spread of the fungal infection. Tinea capitis is passed on from person to person by close contact or sharing of objects such as clothing, bedding and hair brushes.7 Some fungi can even infect our pets and farm animals, and be passed onto humans from infected animals. By isolating those infected, there is less risk of infection to the rest of the community. This requirement for social isolation in developing countries could perhaps be eased by the development of a suitable community-based treatment program.

For medical treatment of tinea capitis orally-administered anti-fungal agents are recommended. These include most commonly griseofulvin, itraconazole and terbinafine.9 While these treatments have high efficacy, they require daily dosing for at least 4 weeks,6 which can be expensive and not suitable for administration to whole communities in resource-poor areas. Furthermore, griseofulvin remains the only licenced treatment for use in children, resulting in restrictions.8 Alongside oral therapy, topical shampoos containing anti-fungals such as ketoconazole are sometimes used,6 however, they have very limited success when used alone.8

There is a real need for more effective topical treatments for tinea capitis. Such treatments have the potential to overcome the cost and licence restrictions of current oral therapies and could become affordable and accessible therapies to whole communities in developing countries, potentially yielding huge health and social benefits.